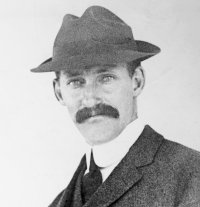 In 1900, a 22 year old Starling Burgess withdrew from Harvard in his senior year to open his own design firm.
His father, Edward Burgess was also a prominent designer of the day.
The Burgess designed J boat ENTERPRISE, the Americas Cup defender of 1930, with her aluminum spars and Tru-Loc fittings proved her worth in a duel with SHAMROCK V. In the next Americas Cup series, RAINBOW, another Burgess design, narrowly defeated the Sopwith designed ENDEAVOUR.
In 1937, Starling took a rising young naval architect named Olin Stephens into his firm. RANGER, the Americas Cup defender of 1938, was the fastest J Class yacht ever built and easily defeated the Challenger, Endeavor II. Some years later the design of RANGER was officially attributed to Burgess.

Burgess was the first American to design twelve-meter class yachts. He was the designer of numerous other schooners, cutters, yawls and one designs, including his favorite, the renowned staysail schooner NINA, holder of numerous ocean racing records. He is also known for his airplane manufacturing company, which flew the first airplane in New England, and as the author of "The Eternal Laughter and Other Poems."

A new biography was released in 2014: