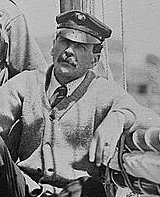 American sailboat designer and racer. Though born in Britain his family moved to the US when he was a boy. In 1890, he founded Rudder Magazine, the best known American boating publication of its day, and was editor until 1919. (Rudder continued to be published until the early 1960's) He was the first to win the annual New York to Bermuda race. The T. F. Day Trophy is named for him.
As a designer, he is probably best known for his SEA BIRD yawl (designed in conjunction with Charles Mower)intended specifically for the home builder and displayed in a 1909 issue of Rudder. Day sailed his own SEA BIRD across the Atlantic, proving it's capabilities. It is though that several hundred of these boats were built.