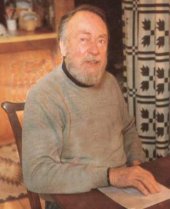 Bill Tritt is known internationally for his pioneering work in the marine and automotive fields from the 1940's through the 1960's. One of his best known creations, the G2 automobile, is at the Smithsonian.
During WWII, Tritt worked at Douglas Aircrafts Production Planning and Illustration Department. During this period, he also designed and built a number of sailing catamarans.
After the war he founded Glasspar Co.(1947) and designed (and did the prototype work) on every Glasspar product made up to 1961. It was also in 1947, that John Green, a yachtsman friend, paid Tritt to design and build a racing sailboat in the 20-foot (6.1 m) range. Fiberglass seemed the logical construction material. The boat was named the Green Dolphin, and four were built in various lengths.
Some time later Tritt started the Hudson River Boat Company, where he designed and built the Packet, SportCat, Resolute, Monterey and Petrel - as well as several large motor cruisers. The molds for the PACKET, were later bought by Pearson Yachts, for which he also designed and developed the PETREL and RESOLUTE sailboats.(1964) (Sadly, after Pearson was acquired by Grumman Corp, all the molds and tooling for these boats were destroyed.)
Besides the 20 or more boat designs, Tritt was responsible for a number of innovations with an influence that carries on to this day. These include the first fiberglass masts (hence the name Glasspar), the first un-stayed fiberglass rigs for boats (Dincat, Dinkitten, Glascat and Privateer), the first un-stayed cat-ketch (Privateer, 1958), first female moulded small boats and car bodies, first use of teak overlays for decking on glass boats (HRBC Packet), first "large" fiberglass catamaran (C&T Arriba, 30', 1960) *won the multi-hull division of Ensenada race, 1960), first fiberglass seaplane tenders (1951) He also designed a number of advanced hull forms for power boats - multi-step V, air-encapsulated tunnel, etc., that were not commercialized.