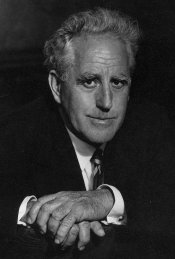 Uffa Fox is considered the father of modern planing sailboats. At age 21, after a seven-year apprenticeship with noted boatbuilder A.E. Saunders, he opened his own firm. Among his many successful designs are the ALBACORE, JAVELIN, FLYING FIFTEEN, and DAY SAILER. He was a major innovator in the INTERNATIONAL 14 CLASS.
Fox was the author of several popular sailing books written mostly in the late 1930s.
During WWII, he designed a boat to be carried and dropped from rescue aircraft to survivors of downed aircraft or sunken ships which he always considered his finest achievement.