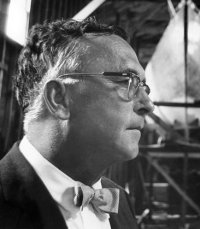 Ray Hunt was the only yacht designer of his era to achieve international success in both power and sail. Among his more notable sailing yacht designs are the Concordia yawl, the 110, and the 12 meter "Easterner," built for the 1958 America's Cup defense. He also designed many 5.5 meter boats, including the winners of the 1960 Olympics and the 1963 World Championship. He is also the originater of the 'deep vee' type power boat designs most famously employed by the "Moppie" series that were so sucessfull in the offshore powerboat racing circuit during the early 1960's. Hunt was also a champion sailing helmsman and winner of many national and international events.